What is African Union?

With the admission of Morocco into the African Union as of January 30th, 2017, the AU now consists of all fifty-five countries on the continent. Based in Addis Ababa, Ethiopia, the main goals of the African Union are to promote the unity and solidarity of African states; ensure their sovereignty and territorial integrity; rid the continent of colonialism and apartheid and promote international cooperation with the United Nations through a unified voice of common political, social and economic policies.

Although the African continent has suffered through an incredibly turbulent and violent past, the African Union is emerging as a promising platform to tackle the many issues that face the rapidly growing continent. The AU is Africa’s premier institution and principal organization for the promotion of accelerated socio-economic integration of the continent, which will lead to greater unity and solidarity between African countries and peoples.

The AU is based on the common vision of a united and strong Africa and on the need to build a partnership between governments and all segments of civil society, in particular women, youth and the private sector, in order to strengthen solidarity and cohesion amongst the peoples of Africa.

As a continental organization, it focuses on the promotion of peace, security and stability on the continent as a prerequisite for the implementation of the development and integration agenda of the Union.

The AU exists from several commissions and of these the Economic, Social and Cultural Commission (ECOSOCC) is the first to invite the Diaspora to take part. The ECOSOCC is a grouping of 150 community-bases organisations, which are also called NGOs (Non-governmental Organizations) and civil society organizations. The Diaspora has been designated 20 members of that 150.

The AU defines the African Continent as being divided into 6 geographical regions namely: 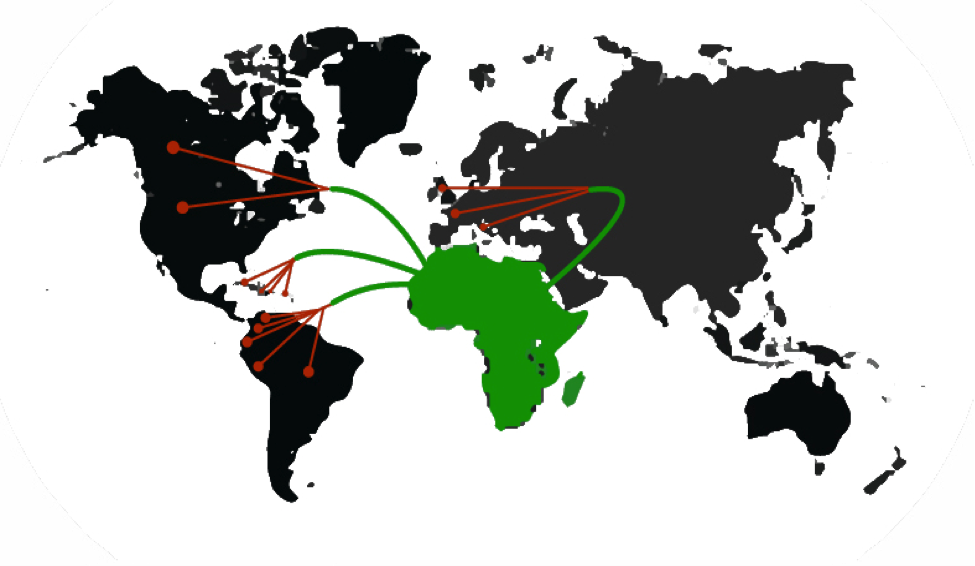 In 2005 the AU defined the Diaspora as “… peoples of African descent and the heritage living outside the continent, irrespective of their citizenship, and who remain committed to contributing to the development of the continent and the building of the African Union“.

Geographically, this large population, variously estimated as between 150 – 350 million folks, is to be found in: